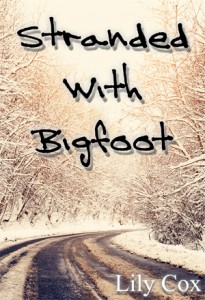 Once I started warming up, my body relaxed and I felt sleepy. I don’t know if it was because the stress of the accident was over or because it was late, but I fell asleep right there in Bigfoot’s arms. I didn’t awake till morning when I smelled roasting meat. From what I could tell Bigfoot had caught a rabbit and was cooking it over the fire. As soon as he noticed I was awake, he offered me a piece to eat.

At this point I was very hungry and had no idea when I would eat again. I wasn’t excited about eating a cute furry bunny, but I felt like it meant my survival. It was strange, but when I shared my meal with him I felt wild as well. It was like I had gone back in time and was now a cave woman and Bigfoot was my mate.

Perhaps this feeling was contagious because after our meal Bigfoot seemed amorous and tried to have his way with me. He came to me and tossed the rest of my meal away. I have to admit that I took this as a sign of aggression, and my heart skipped a beat. Then he pushed away all the skins that I used to cover up. I started backing away, but he only came at me faster. Suddenly, in one motion, he ripped my shirt completely down the front exposing my bra. I immediately crossed my hands in front of me and screamed as hard as I could. He backed away to the front of the cave and howled. We stared at each other for what seemed like forever.

“No, don’t do that.” I had no idea if he understood, but I didn’t have anything to lose trying to communicate.
Bigfoot grunted and patted his chest.

“No, I can’t do this. I need to go home. People will be looking for me.” I tried some lame miming techniques of using my fingers to show walking and then holding my hand at my brow for looking. I felt like an idiot for thinking this would work.

Bigfoot grunted again, patted his chest, and then left the cave. I wasn’t sure where he was and if it was safe to peek out. Would he get mad if he saw me trying to run away? Would he chase me down and punish me for escaping? I had no idea, but if I didn’t at least look outside I would drive myself crazy.

I walked to the edge of the cave, and for the first time, I realized how sore I was from the accident. My body hurt as I moved, but I was still able to get around. There was fresh snow coming down, and the forest was so quiet. I couldn’t hear any cars, so I knew I wasn’t close to the road. In fact, I didn’t even know which direction to go for the road. I felt completely screwed.

Bigfoot came back and handed me a bunch of huckleberries. I couldn’t believe he found some so late in the year. I had a few, and they were a bit tart, but a least they were juicy. I hadn’t had any water for a while. However, he had an answer for that as well. He gave me a turtle shell with snow that was melting, and I was finally able to get some water. I was so happy to finally drink the water that I actually started laughing. This made Bigfoot laugh as well which took me by surprise.

Bigfoot took this moment we shared as a queue to approach me again. He settled down beside me and put his arm around me. He was so warm, and I couldn’t resist crawling into his embrace once more. I could hear a rumble in his chest that kind of reminded me of a purring cat. I laid there listening to it, and I felt like I was falling into a trance. This is when he chose to move his hand to my breast, and he started massaging it gently.

« Bigfoot Saved Me
Bigfoot in my Backyard »