The Adventures of Lusty Lola: The Complete Series 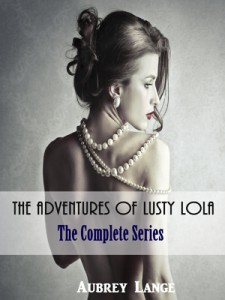 The Adventures of Lusty Lola: The Complete Series is made up of six short stories:

Here is a snippet of one of those stories:

I was on pins and needles waiting for the package to come. It took just a couple of days, so I didn’t have to wait long, and today was the big day. I saw him pull up and got immediately excited. This time there was no question what my outfit was trying to express. I had on my Victoria Secret bra and panty set with my silk robe loosely wrapped over me. I answered the door, and his eyes nearly popped out of his head.

“Hi there. Here with my package again I see.” I struck a pose so that my leg opened my robe up a little bit. I had a big smile on my face, and you could tell I was up to no good.

“Hi, Mrs. Morrow. You look great today.” He blushed and looked down, but I noticed that he licked his lips as well.

“You can call me Lola. I don’t think I’ve ever gotten your name.” I let my finger run down the edge of my robe and drift inside briefly to reveal just a little more cleavage.

“Oh, my name is Wyatt, Mrs. Morrow, I mean Lola.” He looked up and started to hand me my package. I didn’t take it yet, I let him hold it a little bit longer.

“Do you know what comes from that company, Wyatt?” I asked softly, looking him in the eyes trying to say everything I could with my gaze.

“Um, well, yes, I think I do. We’ve been delivering for this company for some time now. I didn’t expect to deliver it here.” He was still holding the package, now looking at it. I could tell he was wondering what was in it.

“Well Wyatt, sometimes women can get a little lonely when their husbands leave for such long periods of time. You know what I mean?” I realized I needed to step it up a notch as this was the last ditch effort, and if this didn’t work I would have to give up. I pulled on the belt of my robe with a gentle tug, and it was just enough for the knot to come undone. The robe opened slightly exposing more of my black bra, my tight tummy, and my lacy panties.

“I, uh, I think I do. Damn, Lola. You look really good. I hope that’s not out of line.” He looked me over, licking his lips. He was sizing me up and I loved it. I was getting so turned on I couldn’t stand it. This had to be my moment.

“Wyatt, do you want to come in and use what’s in that box on me?” I pulled the robe over my shoulders and let it fall to the floor. I was exposed now and wanted him so much. I could feel his eyes on me, and I knew he was thinking of all the things he was going to do to me.

“Oh god yes.” He came in grabbing me with one arm, kicking the door shut behind him, and he still had the box in his hand. This is the moment I had been waiting for. He kissed me hard. Our tongues swirled together, and it was like electric shocks were going through my body. I was alive and on fire.

He dropped the box and now both hands were on my waist. He started moving up my back reaching for my bra and in an instant had found the hooks and removed it. We were still standing in the foyer and I didn’t care. If someone had walked up they could have easily looked into the windows by the door to see exactly what we were doing and that just turned me on more. I was ready to do it on the front lawn at this point.

His right hand had found its way to my breast and he was caressing it softly. His mouth moved down to my nipple and his tongue lightly teased it, flicked it, and tickled it. I let out a slight moan and arched my back into him. This got him going even more, and while he kept his mouth on my nipple, he moved his hand down my stomach and into my panties. His fingers found my wet clit, and he immediately started massaging it sending my eyes rolling into the back of my head. Oh my god, I was so over the edge at this point I was already starting to cum. My body started to tremble, and Wyatt pulled back preventing me from finishing.

“Not yet, Lola. I have much more planned for you.” He grabbed the box and took my hand, and we went running to the bedroom, giggling the entire way. I jumped on the bed and looked at him with a devilish grin.

“Why do you have so many clothes on Wyatt?”

“Good question.” He ripped his clothes off as fast as he could and then grabbed the box. He used a pocketknife to open up the box and found the straps I ordered. “Oh yeah, we’re going to have fun with these.” He scooped me up and positioned me squarely on the bed. He put my legs up in the air and pulled my panties all the way off and threw them to the side. Next, he put the blindfold on me. Now my other senses were on overdrive. I was on edge expecting each and every touch that was about to come.

I felt him take my arm and tie it to the post and then take the other and tie it as well. He kept my legs free, and I was glad as I expected a lot of wriggling to come. He kissed me again, our tongues intertwined and all the tension melted away. He worked his way down my neck with his lips, small kisses with a few licks, and a bite or two for good measure. Then I felt nothing, where was he, my mind swirled with anticipation. All of the sudden, his tongue was on my nipple again. It sent a shock down my spine, and I arched upwards and moaned for more. His tongue was replaced by his fingers, and his mouth started to move down my stomach with tiny kisses. I knew where he was headed, but the expectation was killing me. Then suddenly he stopped again, nothing. Oh the agony, why does he keep me waiting.

« The Best Little Neighborhood In Texas: The Frat Party
The Dare Club: The Teacher »